This was a review of a middle grade graphic novel I did a few weeks back.  Part of the ongoing effort to post any back content that is relevant to the blog. 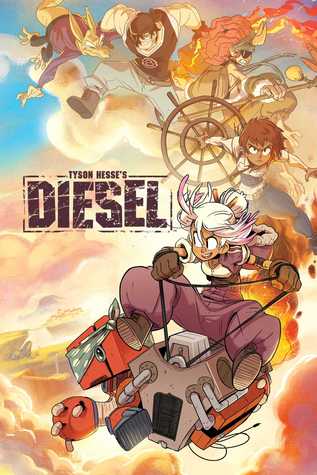 I don’t know if this tag has made its way to the blogging community (probably because I am super late to be posting this here … HA!) but the premise is simple.  Pick some books from your shelves that have been sitting unread and read the first chapter.

This is a great tag for people in reading slumps or who are so excited about too many books and need to pick one… as long as you pick one and don’t keep cycling books chapter by chapter.

I tried to step my editing game up a bit with this one.  I have been trying to push myself not only here but in all aspects of my life.  I am tired of being sad and mopey, it is time to stand tall and be proud of the things that I do.

Comic book day!  Here is a review I did several weeks back now on the first Volume of Descender (Spoilers: I really like the art guys).

Anybody else read Descender?  Anybody else as obsessed with literally everything that Image Comics publishes.  I swear to god they have so many great new imaginative things coming out every month and it hurts my heart and my wallet.

Hey guys … so its been over a month since I’ve posted anything.  I’m having real college flashbacks where I would blink off the face of the internet for a while.  I have still be posting things on youtube so if you follow me there you will have seen my face a little but I’ve been going through a really rough patch as of late and it has led to extreme self doubt.  When I doubt myself I have a tendency to let things that I love slide, because maybe I’m not doing them properly.  Maybe I think I’m doing well when in reality I’m just shouting into an empty void.  Hopefully that isn’t the case.

In an attempt to reform my life in a way, I have started planning posts again (really I fall off the bandwagon when I stop planning… I go, oh I’ll think of something for monday … Monday comes and goes and no posts and so it goes forever).  I have a handful of content that I created while I was on hiatus here that can show up if I am at a loss for content, but I want to keep up with it.  I have been saying this all year.  I want to keep up with it and I want to let you guys know I still care.  Even when I’m in limbo, I still care.

Today, Gretchen and I managed to get together and talk about something that is super topical and super controversial around the interwebs: Harry Potter and the Cursed Child.

I have read the thing, she is choosing not to read it at all.  This tells you a bit about where we stand in it all. We discuss some of the issues we have seen or heard as well as some of the issues around it in general.  If you are interested in our take then please by all means check it out.

(I do apologize for the audio issues, google + has been acting super shifty so I was trying a different style of streaming and the audio was not having it.  What I was hearing was not at all what the stream was hearing but I didn’t have anyone around to tell me this.  We hope to fix this issue in the future, either by returning to our beloved Google Hangouts or by finding some other way to do it … just get better at it in general.)

I hope you guys have had a better summer than I did.  I will be back tomorrow, believe it or not, because we have penciled in a super late book club episode.  Remember when we were going to talk about Middlesex guys … we do.  It is going to happen.

I made a really quick video for you guys, wherein I talk about where I’ve been and why, at least on a surface level.

I have something scheduled for every day this week so hopefully we can bring ourselves back on track a little bit … this one is a bit late, but I tried, in fact I succeeded.  It is here, late or not.

So we weren’t able to do this livestream on Tuesday but we were able to do it this week.  So you are getting this week’s episode a little bit late.  Better late than never?

Tomorrow you get to see our lovely faces once more as we wrap up our week (as well as last week while we were on hiatus).

Since we couldn’t do our planned livestream yesterday due to Gretchen attending an event I posted a video on my own.

So there was no blog post Tuesday, but hopefully there will be two on Friday to make up for it.  The first will be that live stream, the second will be the start of a new series where I talk about translation.

But for today, we have a review!

There we are folks, another lovely comic review.  It feels so nice to be doing these regularly again.  I missed them.  Having an inviting home space is really a huge help when it comes to your comic mental health.  Talk to you guys again soon!

Woo!  I am back!  My vacation was lovely thanks for asking!  The hiatus really helped with that.  I think I was getting a little bit burnt out with all of the hours I was working and trying to maintain the blog as well.  I didn’t have as much time to think about what exactly I wanted to post and so I was just making content that I could rather than the content that I wanted to.

First, though, we must finish what we started.  Before this whole hiatus nonsense I proclaimed that I would be participating in the Genrethon.  Since I was on hiatus when that ended I didn’t get to tell you about the books that I read for it!  Well don’t worry, I’m going to start off by telling you exactly what I read and then we can get back to our regularly scheduled programming!

Here is that video:

There we are, if all goes well then Gretchen and I will be back tomorrow with a new discussion live stream.  We want to talk about book guilt or readers guilt!  Talk to you then!

I’m sorry this post is late guys.  It has been nonstop for me this week and there was one portion of this video that took ages to edit, it should be very obvious.  I shouldn’t keep this from you any longer.  Here we go!

Sunday: Last Week’s Wrap Up
Monday: My Call for Help with Time Management!
Gretchen’s Post on what Happened to her Spring Break TBR
Tuesday:  Betwixt the Books Discuss! Perceived Genre Hierarchy
Wednesday: My Post on What to Look for When Choosing a Comic Store
Gretchen’s Worth it Wednesday on Graceling
Thursday: Gretchen’s Monthly Wrap Up
Friday: My Monthly Wrap Up
Gretchen’s Review of Tell the Wind and Fire

When I say Betwixt the Books, I mean me because Gretchen does not read horror and therefor would have 0 books to talk to you guys about.  I read aloud a mildly spoopy book about zombies and she was too freaked out.  So, yeah, here I am to tell you where you should start in horror, where I started and what I love when it comes to Horror!

That’s all I have for you guys today!  I will have a comic review for you tomorrow and hopefully later in the week there will be a Wrap Up with Gretchen.  This is the final video that I was scheduled to do alone.  If everything works out we will have our precious back!