This one goes out to all those parents, teachers, librarians, and kids who loved Wonder by R. J. Palacio and want something similar.  I gobbled it up and loved every second of it.

I made a video review of this one right after finishing it, watching it back several months later I realized that it took me a while to catch my footing while talking about it but if you can stick with my scattered thoughts for about a minute I get there and you can hear why I think this book is going to become an instant classic.

I liked it more than I liked Wonder which is blasphemy in some ways and warranted in others.  Definitely one to read to help introduce empathy and acceptance of diversity in kids, also a great way to discuss deformity, disability, and mental health at a young age.  One to pick up next week when it is published.

I look forward to Dusti Bowling’s future books because I’m sure she has a bright career ahead of her if this is any indication.  Well done.

Two weeks ago I reviewed my favorite comic of last year, this week I review the runner up.

Yes I have reviewed the first volume of Rat Queens and you can find that review here!

So why is this my second favorite comic of the year?  Aside from the fact that as a nerd who enjoys both playing and running Role Playing games including Pathfinder and this comic being the embodiment of everything that is great about that, I love the fact that this comic wasn’t afraid to put aside their main plot for a volume to build on their characters.

The best part of role playing in my experience is the way that people build their characters, shape them with stories that may or may not be true but they use them to find their place in the world, as well as the way those stories interconnect and bring the group together.  This volume perfectly embodies this.

The humor and the sex and the drinking is all still here, don’t get me wrong, but I really loved the way that this volume focused on what is most likely the worst moment of all of the main group’s lives.  I’m not going to go into specifics but despite the somber tone a lot of these issues had, it meant that by the end of the book you were rooting for them to succeed.  Not just because they were funny and adorable, but because you had seen where they were coming from and why this was important to them.

If you are a character oriented reader this volume will be something that you love I am sure.  The art is fantastic even though there was a change from the first volume, if anything I like it more.  The side characters that I often find myself loving more and more are still here.  There is suspense, there is drama, there is humor.  What more could you ask for in a comic?

I would also recommend this comic to anyone looking for a comic filled with bad ass ladies that are represented realistically.  Each of the girls have a different body type, different struggles, different attitudes.  They are all awesome in their own right.  There is a transgender character.  There are lesbian characters.  All of it feels natural and genuine.

If none of that convinced you I have one final argument, and I’ll leave you with that:

*shock and awe* SOMETHING THAT ISN’T FROM IMAGE COMICS! (I know right?) 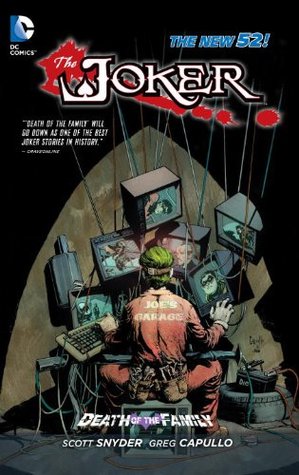 Ping: One of the very best events in modern Superhero history and its orchestrated by THE JOKER.

Now guys, I know that based on my choices in comics you might think that I’m not a big comics person, simply because I’m not all DC SUPERHERO’s this or MARVEL SUPERHERO’s that!  I did do a review of Moon Knight which believe it or not is a Marvel Superhero comic and now I’m doing one from DC which is actually close to my own heart.

When I talk about my comic history I have to say that I started reading comics because my Grandfather would buy me some when he went to the flea market on Saturday.  I would go with him and say ooh look that guy has a Robin Comic that he’s selling for a buck maybe because it wasn’t a particularly old one nor one from a particularly famous lineage, but in any case I was reading a bit of this and a bit of that growing up.

When I got into high school I was very much into Batman comics specifically.  I was actually reading a handful of these comics when Death of the Family came around but this was right at the end of my buying comics (up until this past fall when I fell head first back into the hole).  I pulled out one of my Cat Woman comics that was a part of this line to show Taylor that, yes I was reading it and I even still had a handful.

I wasn’t reading all of them and that’s the key.  The thing that makes this bind up so good, is that it pulls all of the pieces of the stories together.  If you are like I was, really invested in the story line for Red Hood and Outlaws you get a bit upset when the characters get ripped out of their current story arcs to deal with something else that’s going on.  When you are reading it in a bind up like this, with just the bits that pertain to this event it makes oodles of sense.

So, yes I was a bit bothered by it back then, but I didn’t have the whole picture and that’s really necessary for something like this.  Do I think that these sorts of events are a way for DC or Marvel to get higher numbers on some titles that might not be doing as well, of course but sometimes the stories that come out of them are worth it.

Okay fine all of that is good, but why should you read it.  Well, I think the great thing about this whole line is the suspense.  Its called Death of the Family, the big bad here is the Joker he has killed members of the Bat Family before so we know that if anyone is going to do it, it might as well be him.  There is nobody quite like the Joker.

I don’t want to spoil it so I won’t get into the specifics but it was really the lat few pages of this story that got to me.  Once the action is over with you get this little picture of how its effected everyone involved and it was that two page spread that really hit it home.

If you have been looking for something to test out the Batman waters I would say that this is definitely a good contained story to start with that introduces you to virtually all of the titles in the Batman Universe.  You might have your interest piqued for one story line or another and it doesn’t require a whole lot of knowledge of characters before this.  It is well self contained.  At that point you can find the forums telling you which issues are critical for you to be considered a Bat Nerd or whatever.

I have admitted that I am not enthralled with the Super Hero market as it stands right now, there are some comics I enjoy and some that have fallen to the way side for me, simply because I’m not in a place in my life where I want to read those kinds of stories.  However I still enjoyed this bind up very much and I think I will always have a place in my heart for those in the Batman Universe.

What stories do you think are great intros to the Batman Universe?  Alternatively, what are your favorites?

This Christmas my gift to you guys who have stuck around through yet another blog drought brought on by the pressure of being a college student is a review with that ever lover character Taylor.  I mean, I love him so I assume all of you do as well.  No, we aren’t dating.  I love him like you love your third cousin twice removed, out of obligation.

Here it is we are doing the first monthly pull comic review that I have for you guys so far with more to come in the new year!